Does the size of the ring truly matter?

(DISCLAIMER: These are my thoughts and opinions, so feel free to agree or disagree politely.)

What are my thoughts? First & foremost you have to know the type of woman you are dealing with. To some they could care less on how you propose and what you use to propose, they are just happy to get married to the man of their dreams. While others actually care about the type of ring that they receive. I would be straight lying if I told you guys I did not care about the type of ring I get (because I know some people would be so quick to call me out lol), but let me tell you why I think it matters. I say it matters because if the tables were turned, I would get the best quality ring that my finances could afford for my husband to be that I know will make him happy and proud to wear the ring every single day of his life. I would want him to know that I took my time to pick out a ring that best fits him and what he may want. One doesn’t have to spend thousands to get a quality ring, so I think people get it confused that if he didn’t spend a certain amount, the ring is no good. Trust me I have seen some hideous rings that cost an arm and a leg, and I have seen the classiest of rings that may not have been even half of the other ring. Consult with your wife to be or her close family and friends and see what she likes that fits your budget. 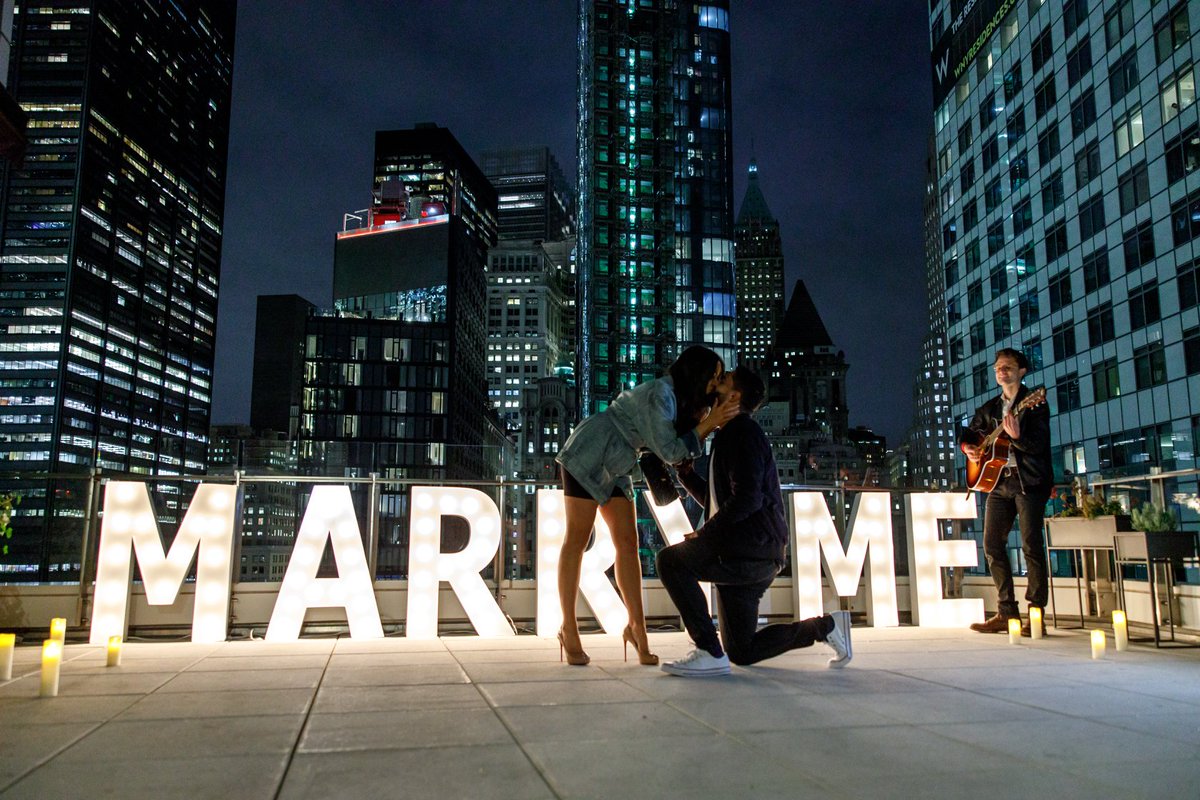 I had the opportunity to speak to 5 married women (ranging in marriages from over 3 years to over 30 years) who gave me their take on their initial thoughts of when they got their engagement ring?  Check out their answers below!

“I was young & happy and didn’t really know much about rings. To me, it was beautiful but my focus was more on who I was marrying and not the ring.”

“I have had the same ring for over 30 years, it has not been replaced.”

“To me, the ring is a symbol of our love and commitment to each other.”

“It was not the design I would have picked out, but glad he picked out a beautiful ring.”

“Eventually I told him, and we got it replaced.”

“It symbolizes our love & faithfulness to each other.”

“I picked my own ring. Didn’t like his choice.”

“I didn’t like the initial ring he gave me, but when he asked I did say yes. So afterward he asked me how I felt about the ring and I told him the truth. So he showed me other options which I was able to choose one I liked.”

“That I was his choice, & he was mine… and 12 years later despite all we have been through I would not trade what we have for anything.”

“I was so shocked because the ring fit my finger perfectly, and the shape of the ring was perfect. We never went ring shopping previously, but he got exactly what I loved. ”

“I loved my ring then, and I still love my ring till this very day. It’s perfect in both shape and size. ”

“My ring symbolizes true love and commitment. Everyone that sees my ring always says,  “Wow your husband really loves you.”

“I was very shocked because it was more than I expected. I told him I wanted a rose gold ring but he got me a rose gold chocolate diamond.”

“I love my ring so not sure this applies”

“Every time I look at my ring it symbolizes our journey. The ups and the downs. A lifetime commitment that holds a very special place in my heart. It is a constant reminder that no matter what we are in this together.” 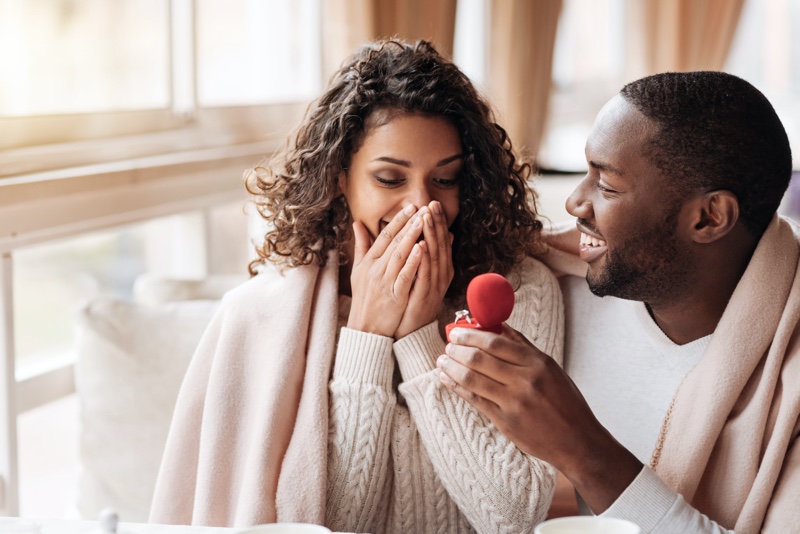 Thanks to RosePaperScissors.com, the following timeline shows how the meaning of engagement rings has changed throughout history, take a read to find out how and why our ancestors gave rings to help you discover what they mean to you.

RINGS WERE GIVEN DURING MARRIAGE TO SHOW WEALTH

The Egyptians wore rings for decorative purposes made from natural substances such as hemp, leather, bone and later, metal. It became gradually more popular for a husband to give a ring to his wife once married to indicate their wealth to her family. Their bodies were found buried wearing such rings on the 4th finger on their left hand as they believed it contained a vein connecting to the heart.

In the early Roman years, verbal consent was used between the husband-to-be and father of the bride to legally declare an engagement. It was then said that the woman would receive 2 rings after marriage, perhaps as a gift, one made of gold to wear out in public and the other made of Iron which she wore to do household chores. Both signified that the husband owned her.

ENGAGEMENT RINGS WERE A CONDITIONAL GIFT

The concept of engagement, known then as ‘betrothal’, came from the Anglo-Saxon word ‘Troweth’ which means truth. The act signified the ‘truth’ that you have pledged your love to someone and was indicated through the wearing of rings for all to see.

ENGAGEMENT RINGS WERE A SIGN OF A PLEDGE TO MARRY

As marriages weren’t yet required to have official ceremonials or registrations, it was actually quite easy to have one! To, therefore, prevent people being from marrying more than one person, or marrying close family members, new laws were enforced. The ‘Banns of Marriage’ were created to make sure there was a period of time after a couple announced they were to wed for anyone to object to the marriage for legal reasons. This duration of time became the ‘engagement’ and rings were used to indicate the promise of marriage while it was being approved. Rings were an obvious way to show that a woman was off the market.

It was the engagement ring given by Archduke Maximillian of Austria to Mary of Burgundy in 1477 that began the diamond ring hype known in today’s world. The ring he gave her when he proposed featured raw diamonds set in the shape of an M on a gold band which was swooned over by all!

The Renaissance happened during the rule of the Tudors. Urbanization and growth in trade links meant that the population grew and also did the middle class. People no longer had to marry as a way of forging alliances between families, they could make their own money as opposed to just inheriting it. Playwrights such as Shakespeare began documenting love and romance and it became more common for people to fall in love and marry as opposed to marrying and hoping love would one day follow.

ORNATE, ROMANTIC RINGS GIVEN AT PROPOSALS

The period known as the romantic era set the trend of giving ornate rings. They were often personalized with engravings of love poems and decorated with heart and flower details. With the powerful example of love between Queen Victoria and Prince Albert at the center of this period, it was clear that love was now present in many marriages even within the royal family.

THE BIGGER THE DIAMOND THE GREATER THE LOVE?…

After a large discovery of diamonds in the 1800’s they became more accessible to the middle class. Numerous marketing campaigns By De Beers made people believe diamonds were the only way to show your love and encouraged people to buy them as ‘diamonds are forever’. Up until the current day, most rings classified as ‘engagement rings’ feature diamonds of some form and people believe they should spend 3 months’ salary on them.