Sandra Bland, 28, was pulled over for failing to signal a lane change on Friday July 10, 2015 around 4:30 pm in Waller County, Texas. Bland was driving a silver Hyundai Azera through Waller County, near Prairie View A&M, her Alma Mater where she got hired for a new job. She got the job in the school’s agricultural department as a student ambassador to the Alumni Association, and was very excited about this new opportunity, friends and family said.

Bland graduated from Prairie View A&M, a historically black college, in 2009. She traveled 1,000 miles away from her families home in Chicago to Waller County, Texas.

The footage, released by the Texas Department of Public Safety ( watch below),  shows State trooper, Brian Encinia pulling over Bland and also demanding her to get out of the car when she refused to put out a cigarette she was smoking.

The Texas Department of Public Safety, whose trooper pulled over Bland for allegedly failing to use her signal while changing lanes, has issued a statement saying Bland became “argumentative and uncooperative” and was arrested on a charge of assaulting a public servant.

After going back and forth with Bland, Encinia puts her into handcuffs and forces her to the ground. Bland was booked for third-degree felony at Waller County jail, and was placed in a cell alone that would normally hold four inmates at one time.

Bland now in isolation for a few days, called her family to tell them what happened and how she thought her arm or shoulder may have been broken. On Monday July 13, 2015 around 7am was the last time a guard saw Bland alive. About an hour or so later a guard saw her hanging from a partition, a plastic trash can liner around her neck. Below you can watch the video of Medical Workers and guards who tried to resuscitate her.

Now how did Bland really die? Was this murder or suicide? Did  she even deserve to be arrested in the first place? Should she have put out her cigarette when asked? So many questions that have not received any answers, other than we know a young lady is now dead.

Many close to Bland are questioning the police account of her death. Those close to her are saying that she is not one to kill herself and take her own life, especially since she was in a very happy place in her life at the moment. Unfortunately there were no cameras in Bland’s cell, but the hallway camera’s showed no one entering or leaving her cell around the time of her death.

The Texas Rangers and the FBI are investigating her death. Hopefully we be able to figure out what really happened to Sandra Bland, and hope justice will be served for this wrongful death!

Here Are Some Pictures Circulating Around the Internet Regarding Bland’s Death: 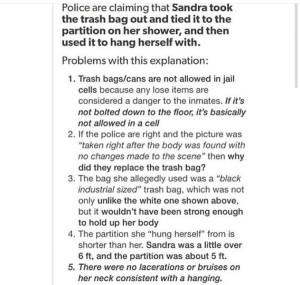 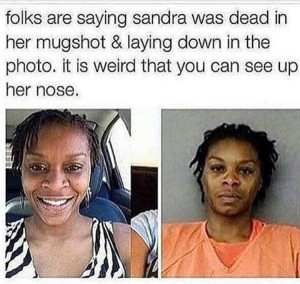 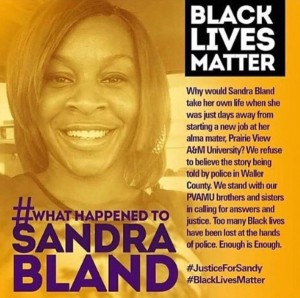 Another View of Sandra Bland’s Arrest